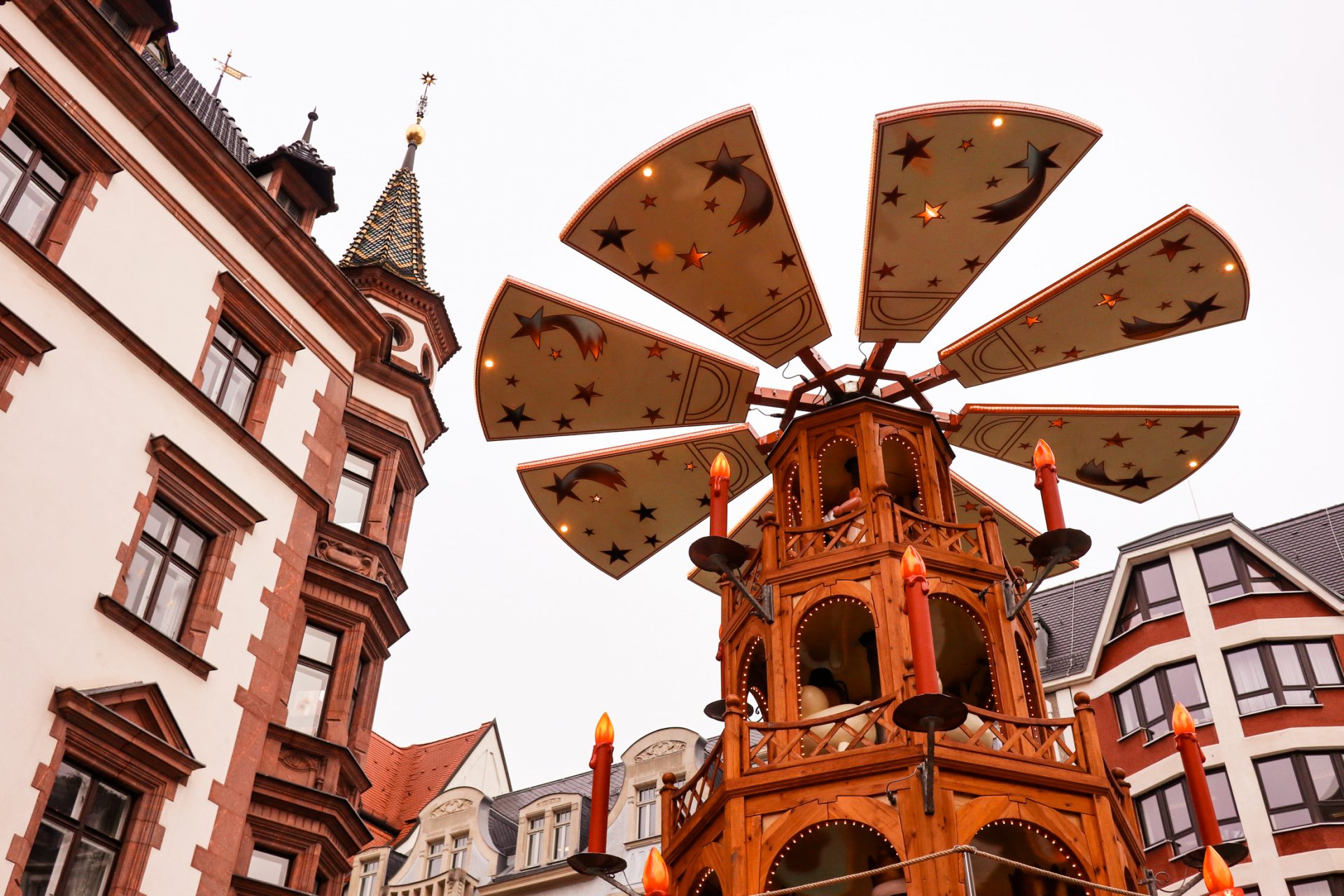 8 fun and fascinating things to do in Leipzig

According to my walking tour guide, Leipzig is known within Germany as “Cheaper Berlin”.

It has some similarities to Germany’s capital, like the super adorable Ampelmännchen street light men that remain from when Leipzig was part of East Germany, but aside from that, I found the city to be rather different. With a population only a sixth of the size of Berlin, the old town streets felt much more intimate and the locals looked as though they were free of that city-dweller rush while going about their daily activities.

To be honest, my expectations were that Leipzig would only have a handful of interesting activities for visitors. Boy, was I wrong! There were a ton of things to do in Leipzig. A few days of exploring was not enough for us to get through all the museums and attractions that were on our list.

Some visitors choose to do Leipzig on a day trip from Dresden, but I’d recommend staying for a few nights to see the city properly. Here are all my suggestions for the best things to do in Leipzig!

We stayed in Apartment Central Leipzig which I thought was pretty damn great! The location was fab, the price was excellent, and the apartment-style room was spacious and cosy. If you want a great place to stay near the old town and only 10 minutes walk from the Hauptbahnhof (Central Station), pick this one!

This particular hotel is also popular because of its proximity to the Leipzig Zoo which is meant to be one of the best zoos in Europe, but as I avoid attractions with confined animals, I decided to give this activity a miss.

Things to do in Leipzig:

1. Wander through the old town

Our time in Leipzig began with a free walking tour in the old town. I love doing these tours as soon as I arrive in a new city; it’s really the best way to get a comprehensive overview of the destination in a short timeframe (usually 2-3 hours).

Leipzig has a classic German old town with more pre-war buildings than most other cities in the country. The best place to start is in the Marktplatz (Market Square). If you’ll be visiting between late November and Christmas, the Weihnachtsmarkt (Christmas market) will be happening here. I’ll admit that Rob and I spent multiple evenings eating all the Christmas market foods and enjoying the festive decorations!

Next to the square is the Altes Rathaus (Old Town Hall) building, which was built in 1557 and is a gorgeous example of German Renaissance architecture. If you’re not doing the walking tour, it might be worth going inside to see the Stadtgeschichtliches Museum which has displays on Leipzig’s city history.

Leipzig’s old town has a few other interesting museums, too. I visited the Museum der bildenden Künste (Museum of Fine Arts), but there’s also the Bach Museum for lovers of classical music and the Zeitgeschichtliches Forum (Forum of Contemporary History) for anyone interested in learning about Leipzig’s recent past.

2. Take a look at the University Church

Leipzig has one of the world’s oldest universities, yet the university building in the old town has a brand new church. The facade has a somewhat traditional chapel design but the geometric features and modern materials make it look almost futuristic. The reasons for the construction of this new church is quite an interesting story:

The original Paulinerkirche (St Pauli Church) once stood in this spot. It was built in the 13th century and served as the university church since 1409. Amazingly it survived the war, but during the communist regime of East Germany it was blown up with dynamite (despite public opposition) to make room for new buildings and discourage religious practice.

The new Universitätskirche (University Church) was built after the reunification of Germany to commemorate the historic one that was destroyed. There’s a small bronze monument out front that shows what the original church looked like, and you can also go inside the church to check out the modern interior.

3. Peek inside the historic churches

Once you’ve seen the modern university church, take a look at some of the historic ones that remained standing! The St Thomas and St Nicholas churches are both worth peeking inside for their pretty architecture.

I enjoy seeing the beautiful designs of these old buildings, but as I’m not religious, I don’t usually feel much of a spiritual connection when I visit them… Leipzig was an exception. St Nicholas Church in Leipzig is famous for being the site of the Monday Demonstrations, which were a series of peaceful political protests in 1989. These protests drew hundreds of thousands of people to Leipzig and ended up leading to the reunification of Germany.

There is a small room in the back of the church with some photos from the events (though unfortunately the descriptions are all in German). The pictures really affected me as I’ve participated in a few big environmental protests in Australia recently. I really felt a sense of hope for the future while dwelling on the actions that happened at this historically important church.

The German tradition of a mid-afternoon kaffee und kuchen (coffee and cake) is ripe in Leipzig. Coffee houses have been a fixture in the city for hundreds of years and were frequented by Leipzig’s famous musicians, including Bach. Nowadays you’ll find a cafe on nearly every corner and most of them will be bustling with locals at 3PM.

You can try some local specialties with your afternoon coffee, like the Leipziger Lerche pastry which is available in most cafes. It was once a snack made with Lark meat but hunting the bird was made illegal in the 19th century, so bakers substituted it with nuts and marzipan. I tried one from a bakery and honestly I just can’t get behind marzipan but I suppose some of you might like it! You can also taste these on a Leipzig culinary walking tour.

5. Go up the Panorama Tower

For fab views over the city of Leipzig, there’s no better spot than Panorama Tower. Located on the edge of the old town, this tall building has an observation deck on the 31st floor. It only costs €4 to go up (bargain!) and the views from the top are unobstructed – no annoying glass or wire fences to look through!

Another bonus is that the observation deck has a small shop selling snacks and drinks, so of course we grabbed a warm glühwein (mulled wine) to enjoy while the sun set over Leipzig.

There is also the ‘Plate of Art’ restaurant a few floors down from the observation deck where you can grab a bite to eat while seeing the views for free, though I honestly think that the observation deck is better value because you’ll get a better vista without looking through the glass windows.

The Völkerschlachtdenkmal (Monument to the Battle of the Nations) is a massive structure built in 1913 to commemorate the 100th anniversary of the Battle of Leipzig. This was the biggest battle to happen in Europe before WWI and was historically significant as it resulted in the defeat of Napolean.

The monument and the attached museum cost €8 to enter. Inside the monument is a huge crypt and two viewing platforms that are accessed via an enclosed spiral staircase (the lower platform also has a lift). I didn’t end up visiting the upper platform as the narrow passageway was too tight for my claustrophobia, but fearless Rob powered on and made it all the way to the top. He said that the stairwell got so small that only one person could enter at a time… there were even traffic lights indicating whether you could enter!

7. See massive art at the Panometer

The massive panorama art and associated gallery at the Panometer was one of my favourite activities in Leipzig! Even though the Panometer entrance ticket was a little pricey compared to other attractions, I think it was worth it. The cylindrical building has a viewing platform in the middle where you can be totally surrounded by a huge art canvas.

I really enjoyed the Carola’s Garden exhibition by artist Yadegar Asisi that was showing; it was about all the wild, weird, and beautiful things that could be found in a private garden near the Panometer. Some of the past exhibitions looked really interesting, too – the Everest, Titanic and Great Barrier Reef ones would have been great to see. The exhibition seems to change around every 2 years.

Get your Leipzig Panometer entrance ticket

This fun neon sign was installed in 1973 as an advertisement for a canned goods company. Affectionately known as the ‘Spoon Family’, the Löffelfamilie features four people eating soup around a table.

The sign became a cultural monument as a remnant from East Germany, and donations by local residents and business have seen it restored to its former glory. You can even light it up for a €3 donation – just text 0900-LOEFFEL and it will illuminate for 3 minutes.

There is usually a beer garden underneath the Löffelfamilie, though when we visited it actually had some vegan food trucks there as part of a winter festival. There’s also some neat street art on the building across the road, and also some cool bars and restaurants along Karl-Liebknecht-Straße. 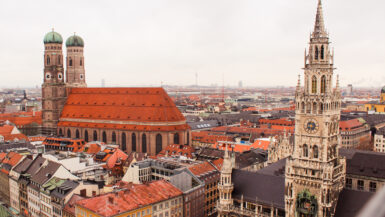 7 activities you really must do in Munich 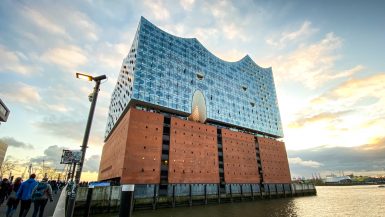 An essential guide to 48 hours in Hamburg 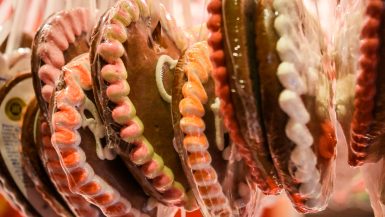